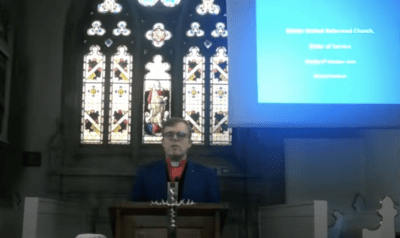 The Albany Terrace Church, in Worcester, or commonly known as the Worcester United Reformed Church, is part of a large group of churches located across Hereford and Worcestershire. With ministers in high demand the URC Group are unable to populate each church with their own minister. The main issue with this high demand is that the church services are very often required to be conducted at the same time and day. For Albany Terrace and Worcester Baptist Church they therefore needed a solution to allow their area minister to be able to attend the Sunday services at Worcester and Baxter Church in Kidderminster.

With technology becoming more common in everyday life, HTS were asked to provide a live streaming solution for the URC group to aid the minister in ultimately, being in two places at once! They asked HTS to meet their requirements of a solution that allowed the area minister to be broadcasted to all of the required churches in the ministers area. This meant that the congregations could watch and hear this live stream all on the same day and at the same time. For ease of use, the URC group wanted the minister to be broadcasted over a platform such as ‘Youtube’ and ‘Zoom’, which will allow other United Reformed Churches the ability to logon to this live stream. Furthermore, they not only wanting to hear the sermon but they also wanted to see it.

The other main requirements for HTS was to design a projection system that would be visible to the congregation with the high ambient light in the room. This audio visual system would also have other multiple uses apart from the live streaming, such as displaying words for hymns and to be used for fun raising activities such as movie nights.

The first phase of this installation started at the Albany Church in Worcester. An Epson projector and 3m projection screen was installed. The church already had an existing audio system in place so the engineers linked this across. The system compromised of a bright Epson G series projector with a large electric projection screen. To make the system easy to use HTS installed a wall mounted control panel that allows the projector and screen to be controlled. The buttons were programmed to operate the most common functions, on/ off, screen up and down, volume control and the input source select. The buttons were labelled and were illuminated for additional visual feedback. This means that the operator can set the system up with a single press of a button.

The next phase of the installation was to install a camera system at Baxter Church located in another town. This was installed to allow the minister to be able to deliver his sermon to the local congregation. This also provided the solution for the minister to broadcast either live or pre-recorded events to other URC sites.

To see the end results of HTS’s live streaming solution for the URC group, watch one of their live streams!

Get updates and learn from the best

Clear audio is at the heart of effective communications.  When the quality is poor, it is frustrating at the best of times, causing confusion, disruption, and

Bring Your Own Meeting (BYOM)

Do You Have A Project You'd Like To Discuss?

drop us a line and keep in touch